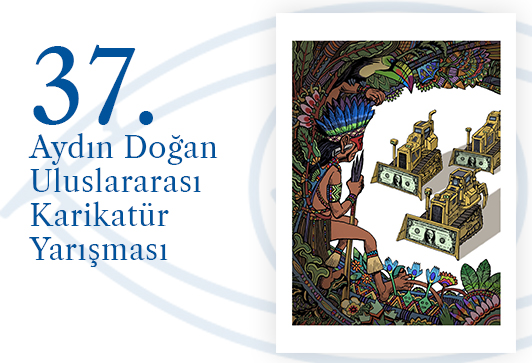 'Aydın Doğan International Cartoon Competition' which brings together cartoons and cartoonists from around the world at a free-thinking platform, is finalized.

In the event organized online for the first time,

Caricature by Reynerio Tamayo from Cuba was awarded the first prize.

At the Aydın Doğan International Cartoon Competition, organized by Aydın Doğan Foundation for the 37th time, with the aim of spreading inter-communal reconciliation, love, friendship, freedom, and peace through caricatures, this year's winners were determined at the jury meeting held online for the first time due to the pandemic.

This year, 930 artists from 83 countries received approximately 4,500 applications for the free-themed Aydın Doğan International Cartoon Competition, which is accepted as the most important competition in the cartoon world, where newsworthy topics around the world are blended with art in a humorous way.

The Selection Committee awarded Reynerio Tamayo from Cuba in the competition this year with the first prize. The second was Mahmood Nazari (Iran) and the third was Mojtaba Heidarpanah (Iran).

The awards for all the winners and the sculptures symbolizing the winning artists are planned to be presented at the ceremony to be held at the Istanbul Tophane-i Amire Culture and Art Center in November, depending to the conditions of the pandemic.