"Aydın Doğan Award" which is held by the Aydın Doğan Foundation to reward successful people in the fields of culture, art, literature, and science and is accepted as one of the most reputable awards in Turkey was granted to the ceramic artist Alev Ebüzziya in the award ceremony organized on Wednesday, November 2 this year. 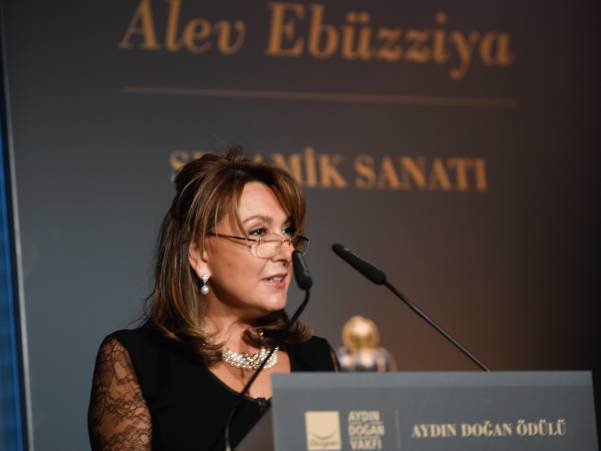 "Aydın Doğan Award" which is held by the Aydın Doğan Foundation to reward successful people in the fields of culture, art, literature, and science and is accepted as one of the most reputable awards in Turkey was granted to the ceramic artist Alev Ebüzziya in the award ceremony organized on Wednesday, November 2 this year.

Having been presented annually by the Aydın Doğan Foundation since 1996 with the aim of contributing to enhancing the culture and life quality of the society and of awarding individuals and institutions praised in different fields such as culture, arts, literature, and science on national and international platforms, the Aydın Doğan Award was granted to Alev Ebüzziya in the award ceremony held at Hilton Istanbul Bosphorus on Wednesday, November 2 this year.

In the ceremony, the opening speech was made by the Chairwoman of the Board of Directors of Aydın Doğan Foundation Arzuhan Doğan Yalçındağ. Chairwoman of the Board of Aydın Doğan Foundation Arzuhan Doğan Yalçındağ said, “Alev Ebüzziya is an artist whose works feature a tradition that exists for almost 10 thousand years, and tracks of the Anatolian civilizations. She has carried on ceramic production for over 60 years with great patience, persistence, and consistency. Inspired by her roots, Ebüzziya developed a unique, actual and timeless expression. She is a source of inspiration for her colleagues both in Turkey and around the world, and eminently deserves the title 'the creator of magic bowls'. We are gratified and proud to present Aydın Doğan Award to her."

Ebüzziya received the award from Vuslat Doğan Sabancı, the Vice Chairman of Aydın Doğan Foundation, in the ceremony in which many guests from the world of business, arts, politics, and media participated.

Alev Ebüzziya deemed worthy of the 26th Aydın Doğan Award said in her speech, “Some of my family members are journalists, so this award has a special meaning for me. It was often written that I seek excellence. For me, excellence is boring. My intention is to create works having vibration. Patience, persistence, doubt, and self-criticism have accompanied me on this long path. Always, a need lied behind the colors I used. I began making the blue works as I was going through difficult times. I realized that I instinctively chose blue because it is a relaxing color, not because I missed the Aegean Sea. Colors also changed along with me. When I started making the red ones, 'You have reached that maturity now!' said a close friend of mine. In addition to the joy and pride of being granted the Aydın Doğan foundation award, the responsibility brought by it will be engraved in my mind.

In Aydın Doğan Award Ceremony, the special exhibition which includes the portrait photos of Aydın Doğan Award winners taken by the photographer Alp Sime and the mini concert of the Cellist Nil Kocamangil and the Pianist Cem Babacan drew great recognition from the guests.